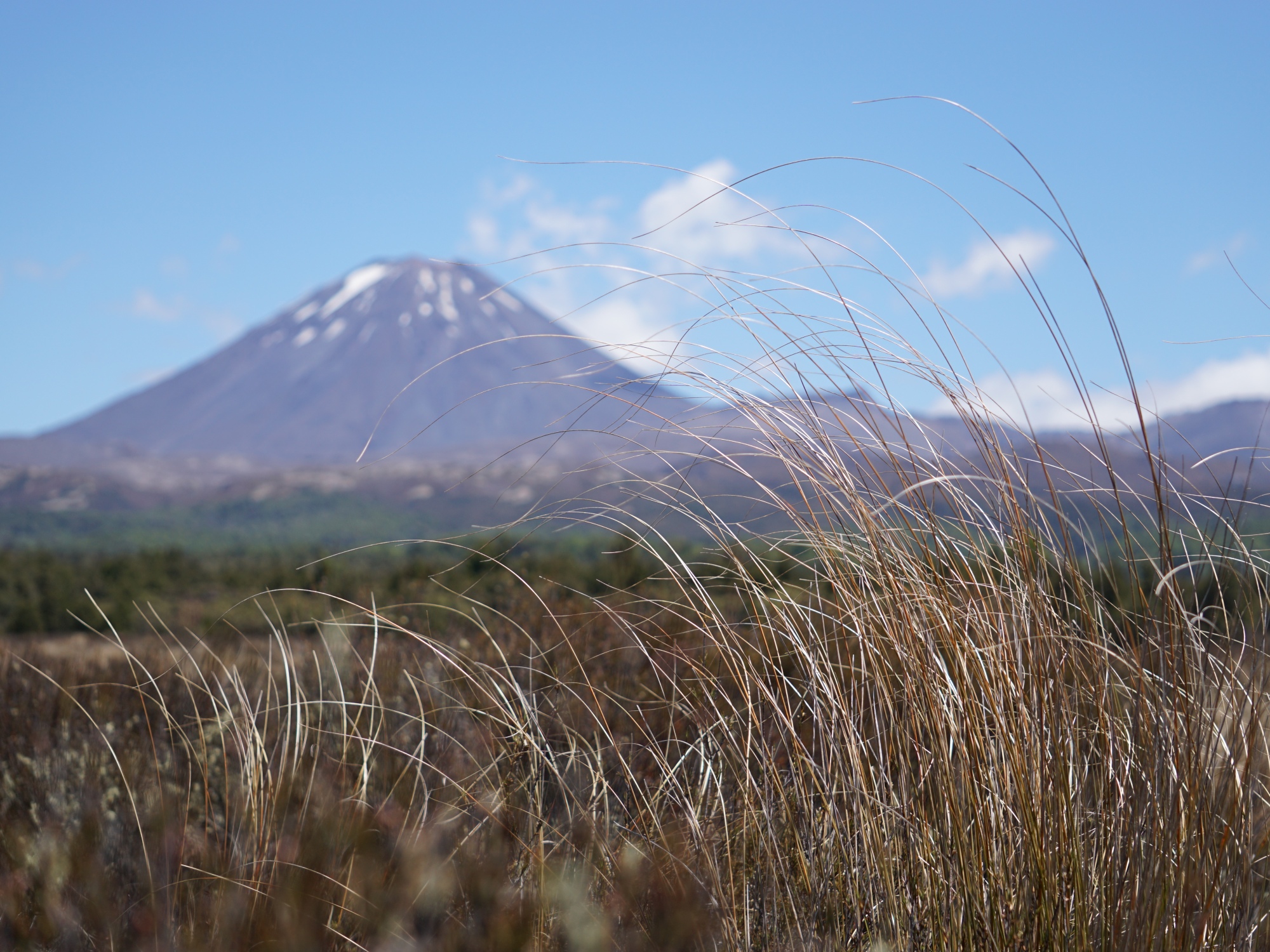 For a taste of Hawke’s Bay, Tyson and I headed for the town of Napier. We made a few pit stops along the way, viewing Huka Falls and discovering secret hot water sands on Lake Taupo’s shore. Once we reached Napier itself, we visited five wineries in the region: Black Barn, Mission Estate, Church Road, Brookfields and Craggy Range. Though each offered beautiful views of the vineyards and surrounding countryside, it was Brookfields that we enjoyed best. Here we sat down at table and were made to feel at home by the owner, enjoying his tales and his company in relaxed comfort as we sipped at this and that. We were even invited to pour our own tastings from the medley of bottles scattered haphazardly around us. Our taste for wine well satiated, we turned in for the night. Once again, our AirBnB booking did not disappoint – and in the evening hours we witnessed a sunset over Napier and its shoreline from the balcony of a small house set upon the city’s surrounding hills. 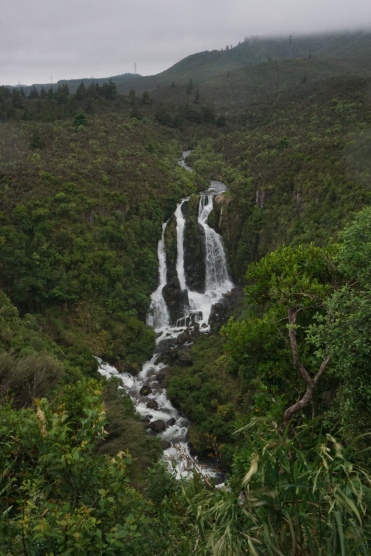 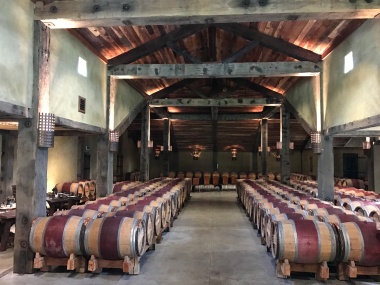 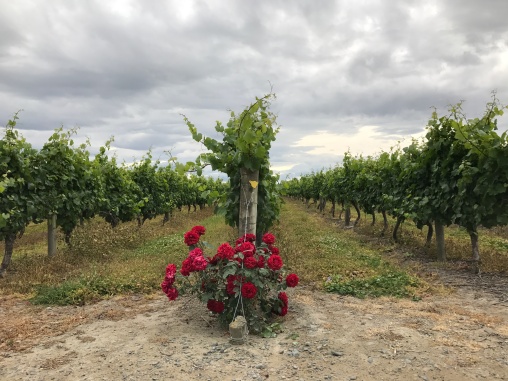 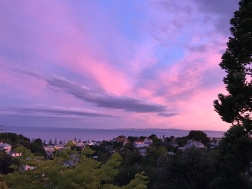 The next day we drove the Desert Road down through the Ruapehu District and ate sushi from St. Pierre’s (a fast favourite for the $5 daily deals) under the shadow of Mount Doom itself – or rather, Mount Ngaurahoe, featured in the Lord of the Rings trilogy as the aforementioned peak. With the sun at our backs, we arrived at our third NZ Workaway amidst the hills of the Wairarapa region. Warmly greeted by our hosts, Nicole, Dave, and their son Wyatt, we soon got to work with a range of tasks on their farm. During our stay, we moved and stacked baleage, devising a way to shift the bales using a tarp behind the quad; we planted poplar poles along the driveway; we mowed lawns and did a whack of weed whacking (with a homemade trimmer head which used chains for blades!); we stained and painted the baseboards around the house; and we even mucked out the horse paddocks, with Tyson exhibiting characteristically begrudging participation in anything poo-related. 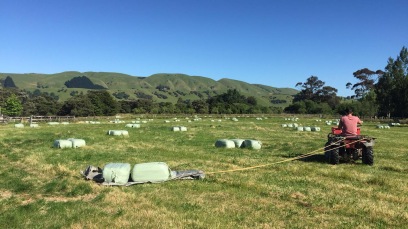 Speaking of horses, staying with Dave and Nicole proved a real treat for me, as they had five horses on their beautiful property – one of which was a frolicking six-week old Gypsy Cob colt! There were many opportunities for riding, of which I took full advantage. Not only that, but Nicole graciously demonstrated the Warwick-Schiller horsemanship method for me, both through groundwork and in the round pen. Tyson also went on many a ride, though he did so on the farm’s dirtbikes instead. 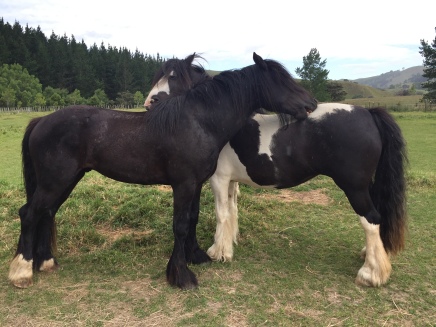 Pia and Ollie the stallion grooming one another.

Out for a ride on Dave, a retired Standardbred trotter.

Belle helping us with our chores.

Luckily for us, we were heartily invited to stay over the Christmas holidays. Christmas Day saw us rising early in the morning to drive the Remutaka Pass to arrive in Porirua, where we were to have breakfast together with Nicole’s family. Thus began our initiation and integration into the family’s traditions, starting with croissant breakfast and the exchange of gifts (in which we were so graciously included). Afterward, there was time to socialize and play with the Diabolo circus toy before pitching in to help prepare a most extravagant lunch as the main Christmas meal. It was all so delicious, but dessert was notably so – the most heavenly helping of Pavlova I’ve ever tasted, and possibly will ever taste, until the end of my days. 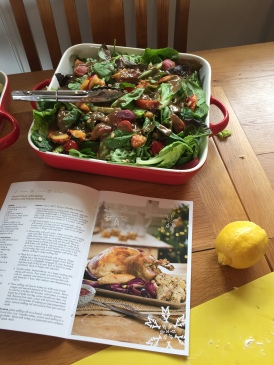 Next came the Yowie competition. This was a very serious challenge from which only one can emerge triumphant. While still seated at the lunch table, we were each handed a double-wrapped Kinder Surprise chocolate egg. The fastest person to unwrap their egg, eat it, and build the toy contained inside would win. Well, friends, as fate would have it, I am now the Yowie Champion of 2016! Amidst all the laughter, I had to explain that growing up in a family of seven kids meant that if you didn’t eat fast, you didn’t eat at all!

In the evening hours, Tyson and I returned to the farm on our own to house-sit while Nicole and Dave went on holiday. Along the way, we had a twilight walk through the forests at the film site of Rivendell in the Kaitoke Regional Park. The following five days were spent in relaxed bliss at the farm. I particularly enjoyed experiencing the dream of country living, waking up early to feed the horses before sipping a coffee on the porch, soaking in the morning sun with cats and dogs alike to keep me company. In the evenings, it was feeding time once again; on one occasion this was done under a blaze of colour from a beautiful sunset. The single rainy day we had was spent cuddling cats and watching a selection of cult classics next to a warm hearth fire.

During this time, we set out on a day trip to visit the Putangirua Pinnacles and Cape Palliser. The Pinnacles were featured in LOTR as the “Paths of the Dead.” The jutting rock formations certainly seemed fantastical as we hiked along the riverbed, exploring nooks and crevices between the tall pillars of stone. We then stopped to eat lunch at Palliser Bay. Here, we were entertained by an entire colony of seals who either basked on the shore or played in the waves. After we’d had our fill – both nutritionally and photographically speaking – we climbed the 253-step staircase to look out over the coast from beneath the Cape’s lighthouse.

New Year’s Eve found us reunited with Nicole and Dave, alongside a lively crew of their friends and neighbours for a good old-fashioned barbecue. We spent the night around the fire, visiting and playing card games until the stroke of midnight. Another exchange of tradition took place at this point, for in true Schaefer fashion, I had the entire group jump off the couches into the New Year! So it was that we began 2017 with a lot of adventure and a little bit of home.

From my wandering heart to yours,